Bahr expands the Tripod by a torque tube 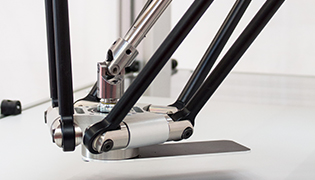 Last year BAHR Modultechnik, a globally leading manufacturer of modular positioning systems, surprised the automation industry with an especially economical tripod system which is exclusively composed of standard components: the robot’s parallel kinematics is based on the interaction of three belt-driven linear axes. Now BAHR has expanded its tripod robot by a torque tube at the gripper base plate, which enables rotational movements of the customized grippers or tools. Bore holes in the rotating module allow for easy mounting to the customer-specific application.

The fact that the rotating module is driven by a telescopic shaft shows that this solution follows BAHR’s motto of consistent system simplification, which ensures a highly economical system that is nearly maintenance-free and very flexible. As far as the linear axes are concerned, BAHR Modultechnik relies on the robust, cost-efficient axes of its LSZ 60 series, which make the system very space-saving. The profiles, which are available in any length, can be combined with other T-nut profiles, so that the user can provide the system with additional add-on pieces very easily.

The tripod’s clevis arms made of a light-weight, highly robust carbon fibre plastic or aluminium are mounted directly to the carriages of the positioning axes by means of joints. Thus, the use of gears is not necessary. In addition, the linearly guided rod arrangement requires less joints than conventional tripod positioners – which is a clear advantage regarding stability, since the clevis arm joints can become weak points under high loads or in case of impacts acting on the system. A special benefit of the tripod is its compatibility with controls and motors of any make. The robot has been sucessfully tested with systems from Siemens, Yaskawa, SEW, Lenze, Mitsubishi and Kinco.

“Normally, users are offered only comprehensive complete solutions including the controls. For that reason it is often necessary to adapt the interfaces between the controls of the respective application and those of the positioning system,” said Dirk Bar, Head of Design at Bahr Modultechnik. “However, our tripod system comprises only the complete mechanical structure, so that our customers can equip the system with their preferred controls and motors.” 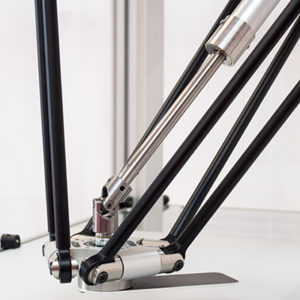 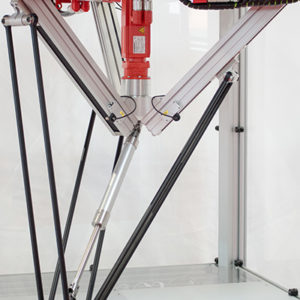